Build a “home” for mason bees

In 2015, we learned how to build simple mason bee boxes out of recycled materials. Unlike many “gadgets” purported to help wildlife, these actually work. Mason bees laid eggs in the paper tunnels we made for them, the eggs hatched and completed the life cycle, and the progeny are busily pollinating our fruit trees right now (spring 2016).

Mason bees are named for their use of mud or clay in their “nests.” They belong in the genus Osmia in the family Megachilidae.

At the Fletcher Wildlife Garden, we have found Blue Orchard Mason Bees (Osmia lignaria) as well as at least one other unidentified Osmia sp. Species in this family are very good at pollinating fruit trees. They have only one generation per year, and the adults emerge from their overwintering nests just as serviceberries, wild plum, and cherries are blooming.

They are closely related to leaf-cutter bees, which will also use bee boxes, but emerge later in the spring.

In April-May, adults emerge from overwintering sites and start looking for an appropriate place to lay eggs. Once they’ve found a tunnel, they gather pollen and nectar from fruit trees, and, in the process, ensure a crop of apples, cherries, plums, or berries for us humans. Mason bees also need a source of mud, which they use to seal each cell inside the tunnel after filling it with a pollen-nectar pudding and laying an egg. Adults live 4-8 weeks.

The eggs hatch in about a week and the larvae begin to eat the food left for them. By late summer, they are ready to pupate. In September, the pupae open and adults emerge but stay inside their cocoons all winter, coming out the following spring.

Mason bees do not dig tunnels; instead they look for “natural” tunnels, such as hollow plant stems or twigs or the abandoned nests of other insects. They are readily attracted to paper tubes. Drilled holes in wood are also an option, but both types of tunnels should be replaced every year to minimize parasites and disease. Drilled holes in wood can be lined with parchment paper to make replacement easier.

In spring 2015, we had a workshop at the FWG to learn to make a simple mason bee house using a milk carton and paper tubes (the instructions are below). The advantages of this type of nest box is not only the low cost, but they are also easy to make, long enough to hold many chambers, and they can’t be broken into from the sides. Jenny Sheppard was our instructor and her technique is based on a system developed over many years by Richard Scarth of Vancouver.

We put two of these nests into our “insect hotel” located on the south side of our Old Woodlot. The hotel gets plenty of sun and we’ve been planting fruit trees along that edge of the woods for the last few years. There are also many apple trees within a few hundred metres around the edges of our Old Field. In spring and when it rains, the security road along the south edge of the woods becomes muddy, giving the mason bees material to seal their nests.

These boxes are temporary, so the idea is to unroll the paper tunnels in the fall, gather the cocoons, clean them, and store them in the refrigerator or other cold, but not freezing, place. Bring them out in spring and put them into the back of a new nest box. Although this is certainly interfering with Mother Nature, it also increases the survival rate of these much-needed bees.

Alternatively, the boxes can be left in place outside if they are protected inside a wood or plastic outer container or placed in a protected place, such as a garage or shed.

Instructions and photos from Richard Scarth

Make nesting tubes
Cut or tear the typing paper in half to make 2 pieces, each 5.5” by 8.5”. Put the 2 pieces together (with printed sides facing in) and position them with a short edge facing you. Tear off 3 pieces of tape, about an inch long, and keep them handy for fastening finished tubes.

Place the 5/16” dowel across the paper about 3/4 of the way down the page. Lift the lower 1/4 page and fold it over the dowel and position it squarely over the upper 3/4. With your fingers, tuck the paper under the dowel while rolling the dowel up with your thumbs, as shown in the picture. (You may find it easier to tuck the paper if you moisten your finger tips.)

Once started, continue rolling the dowel up with the flat of your fingers, keeping steady pressure to ensure that the paper is tight against the dowel. As you near the end, pick up the dowel, finish rolling, then secure the tube by wrapping a piece of tape around its middle.

Inspect the two ends of the tube and wrap a second piece of tape around the end with the flattest surface, about 1/8″ in from the end.

Close the other end of the tube by pinching and taping. To do this, pull the dowel partly out so that its end is about 1″ inside the end of the tube, pinch the end of the tube and close it by taping over the end. It’s important to reduce, as much as possible, the amount of light entering the tube. Finally, to give the female bee more room to nest, push the dowel back into the tube against the pinched end while gripping the pinch with your thumb and forefinger.

Bundle and insulate
Paint the ends of 7 of the tubes with light blue paint. When they are dry, distribute them randomly in the bundle of 19 tubes. Hold the bundle together with two elastic bands.

Wrap paper toweling around the bundle to insulate the bees against cold nights in early spring and hot days in summer and to prevent the bundle from moving around inside the milk carton. Use seven 2-ply sheets that are 27 x 23 cm each. Fold them in half lengthwise and wrap them around the bundle of tubes with the folded edge at the front. Secure with two elastic bands, if necessary. 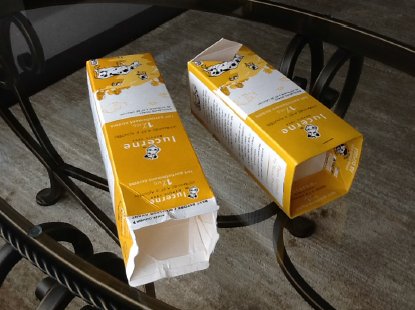 Prepare the shell
The shell of the nest is a 1-litre milk carton that contains the insulated tube bundle, the two exit tubes, and the two dowels.

With a pair of scissors cut off the 1-cm white border at the top of the carton. If the carton has a plastic spout, cut around it and remove it. Fold the top pieces into the carton and staple them in place. With a box cutter (or exacto knife), cut a V-shaped hatch on the upper side of the carton near the base. This is used to put last year’s cocoons into the carton behind the tube bundle.

Make exit tubes
The two exit tubes, which are placed in the upper corners of the nest, allow the bees to leave the nest after emerging from their cocoons.

Make two more paper tubes, as above, but this time use three half-sheets of printer paper and the larger, ½-inch dowel. Leave both ends open.

Assemble the nest
Place the insulated bundle of tubes into the milk-carton shell making sure there is space behind them (under the hatch).

Add the exit tubes in the two upper corners. We like to place the dowels in the lower corners to keep them from getting lost and to help hold the bundle in place.

Some sources of information about mason bees 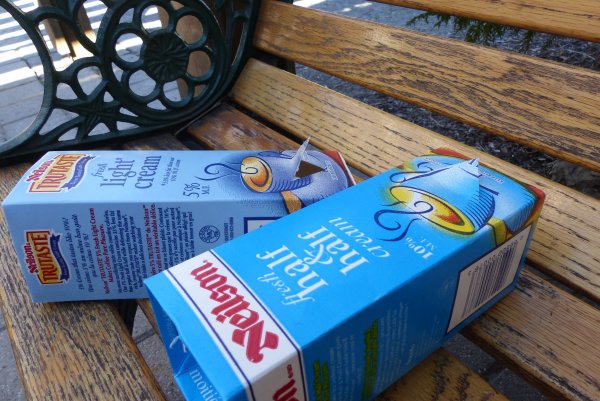 Mason Bee cocoons that have been stored in a refrigerator over the winter. Now that the weather is warming (end of April), it’s time to return them to a more natural location.

I put the cocoons into the space at the back of one of the new boxes through a small trap door cut in the top of the box.

The four larger tubes in the corners of the box are open at both ends. When the bees emerge from their cocoons, they will use these to escape from the box.

The two new Mason Bee boxes installed in our insect hotel. The hotel contains “rooms” for other bees, wasps, and insects. Residents have included Leaf-cutter Bees and Grass-carrying Wasps.

A Mason Bee exploring another box I made for my own backyard.

Success already. In this photo, taken on 12 May, you can see 8 holes in the left box and 1 in the right already filled with chambers holding eggs and pollen and sealed with mud.