Hunting for the elusive Blanding’s Turtle

by David Seburn and Brandon Holden

The Ottawa Field-Naturalists’ Club has partnered with the Canadian Wildlife Federation on a turtle conservation project in the Ottawa area. This is the first in a series of blog posts on this work. Why turtles? One reason is that 7 of Ontario’s 8 species of turtles are listed as species at risk.

One of the main priorities of the project is to locate new areas with the Blanding’s Turtle (Emydoidea blandingii), a threatened species under Ontario’s Endangered Species Act. Through this act, habitat regulation provides a degree of protection to wetlands within 2 km of all confirmed Blanding’s Turtle occurrences. By locating Blanding’s Turtles in previously unknown areas, we can provide habitat protection to those wetlands. Stringing together multiple sightings will ensure protection for larger areas of habitat – and that benefits a wide range of species.

Before field surveys could begin, we first had to compile existing Blanding’s Turtle records from the Ministry of Natural Resources and Forestry. Mapping that data and our understanding of Blanding’s Turtle biology made it possible to select areas that appeared to have suitable habitat but where no Blanding’s Turtles had been observed.

Field trips to these targeted areas began in May. Our first day in the field involved a canoe survey in a promising wetland in Ottawa. Recent sightings in the general area meant it was likely there would be Blanding’s Turtles here. We just had to find them… 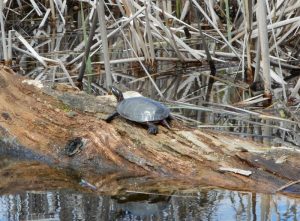 After launching the canoe and a brief paddle, we saw some Painted Turtles (Chrysemys picta) basking in the sun.  Using binoculars to scan the nearby shoreline and floating logs, we observed more than 20 Painted Turtles, a Snapping Turtle (Chelydra serpentina), and a Northern Water Snake (Nerodia sipedon), but no Blanding’s Turtles.

We then crossed a beaver dam and soon found ourselves in a small, secluded bay. Our excitement rose when we saw multiple downed logs with basking turtles. They were still too far away to positively identify, so we paddled forward silently, trying not to startle the wary turtles. Moments later, we were able to make out the distinctive bright yellow throat of not one, but two mature Blanding’s Turtles!

After a quick series of pictures to confirm the observation, some extensive note taking, and recording our location with a GPS, we let the turtles be and started to work our way back through the wetlands. We could not have asked for a better result during our first turtle survey of the season. One carefully documented observation will add extra protection to this wetland and all its inhabitants. 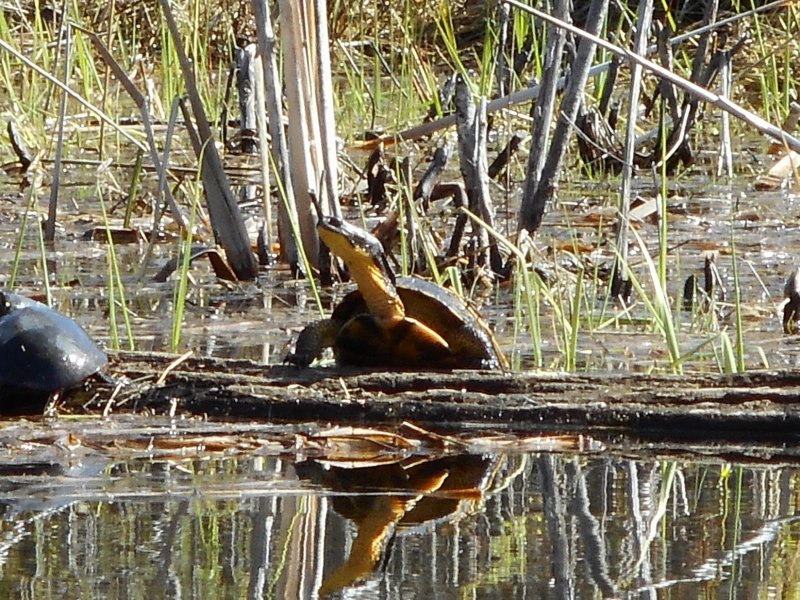 One of two mature Blanding’s Turtles (Emydoidea blandingii), found in an area where this species has not been previously reported.