Bird nests at the FWG

Birds nesting at the FWG

Nests come in all shapes and sizes — from the familiar cup-shape to massive earthen mounds that bear no resemblance to nests at all. Nests can be made on the ground, under the ground, in the tops of tall trees, low down in shrubs or vines, and inside trees. They can be made under the eaves of buildings, in tunnels in banks, on rocky ledges, suspended like socks from tips of tree branches, under flaps of loose bark, and of course in nest boxes. Birds have also made good use of human-produced items for nesting; they will use fence posts and hydro poles, hanging baskets and mail boxes, old boots, flower pots, and any number of other odd items that somehow look like home to the birds. Some birds make nests on mats of floating vegetation, and some species make no nest at all.

Nests can be elaborate structures added to year after year; an example are eagle nests, which may weigh a ton or more. Some are tiny, intricately woven creations, like singular works of art. Others are precarious platforms composed of a few twigs placed any which way across supporting branches. Still others are large untidy nests of grass and twigs. Most species make only one nest, but some will build two or three or more, although they use only one. In fact, nests are as varied as the species that make them.

Some species reuse the same nest several years in a row, refurbishing it with new material. Many more species will make a new nest using material from the old. This is why we make a practice of never removing birds’ nests from the garden. However, some of the dislodged ones will be collected and placed in the Resource Centre after they have been examined. Small amounts of nesting material are sometimes gathered from intact nests in the fall and winter for purposes of identification. The only exception to our rule is the annual cleaning out of material from nest boxes to provide a clean environment in quarters that are reused year after year.

Why do birds make nests? Or perhaps we should ask, why do most birds make nests, because as just noted, not all of them do. Nests are the birds’ seasonal homes, places where they can lay their eggs and raise the next generation. Once breeding has finished, the nests are no longer used. At least not by birds. I have found white-footed mice happily ensconced in tree swallow nests inside nest boxes, and sometimes in other nests lower down in shrubs. And I have seen both mice and chipmunks, as well as red squirrels, hoard seeds and fruit in the nests of birds such as robins and red-winged blackbirds. In winter, birds such as Black-capped Chickadees or House Sparrows will sometimes huddle together inside nest boxes. Roosting boxes are sometimes erected for this purpose, but nest boxes seem to function reasonably well.

It can be difficult to see most nests because birds are very clever at concealment. There are always exceptions of course. One American Goldfinch nested unusually low in a Staghorn Sumac (Rhus typhina) shrub, about 5 feet above the ground and overhanging the Bill Holland trail. The best time to see nests is after the leaves have fallen, although even then, it is easy enough to walk right by a nest and not see it because it looks like a bunch of twigs in the middle of a twiggy shrub.

Eastern Kingbird’s next with chicks

Species nesting at the FWG

At the FWG we know that 28 species of birds have bred here, although we have only found the nests of 18 of those species. Nonetheless, breeding evidence can be inferred in many ways without the need to see the actual nest. Familiarity with bird behaviour makes it easy to interpret actions that signal nesting is underway. Later in the season, young birds, newly fledged, clearly make their presence known.

The most prolific nesting birds at the garden are Red-winged Blackbird, Tree Swallow, and American Goldfinch. We have had up to 8 pairs of blackbirds nesting in the pond in recent years as the cattail growth has spread and created safe nesting habitat. Occasionally a pair of blackbirds will nest a short distance away from the pond. Tree Swallows make good use of our nest boxes suffering little competition for space from House Sparrows who usually only use 5 or 6 of the nearly 40 nest boxes present.

Yellow Warblers and song sparrows are quite common in the garden with 3 to 5 pairs annually breeding there. Black-capped Chickadees are the next most common nesting species, followed by Northern Cardinal and American Robin. Gray Catbirds are fewer in number but in any given year two pairs will nest, sometimes three. At least one pair of Warbling Vireo, Baltimore Oriole and Mourning Dove nest each year. For three years in a row we had a pair of Green Herons nesting, as well as a pair of Eastern Kingbirds, and most years the kestrel box on the red barn will be occupied by a pair of American Kestrels. Downy Woodpecker, Cedar Waxwing, Red-eyed Vireo, Mallard, American Crow, European Starling, and House Finch are all irregular nesters at the garden, nesting in some years and not in others. American Redstart, Brown Thrasher, and Killdeer have nested only once. In the early years of the project when the Resource Centre was only occasionally used, barn swallows would build a nest under the eaves, but they have been absent for the last 10 years.

Certain locations in the garden are more favoured by nesting birds than others. Often it is because there is more cover (i.e. thickets of shrubs, tangled vines and other vegetation, stands of conifers) which creates safer nesting conditions. Sometimes, however, birds choose sites that are so precarious that nesting success is not often assured! The Amphibian Pond is of course popular with blackbirds and the tree swallows inhabiting the nest boxes all around it. The New Woods, the thickets around the Old Field, and the red osier dogwood thickets north of the Old Woods are other areas which seem to attract the greatest concentrations of nesting birds. However, birds will nest in almost any site that seems to offer all the right ingredients for safe nesting and have been found in just about every part of the FWG. 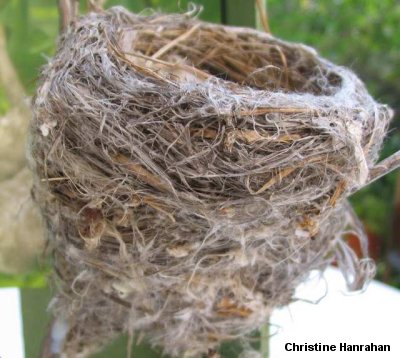