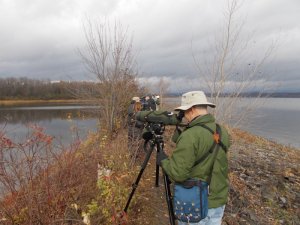 Richard Singhroy is a student at the University of Ottawa. As part of the university’s Community Service Learning program, he has volunteered to report on several OFNC outings and meetings.

On Sunday, November 1 at 8 am, a group of Ottawa Field-Naturalist Club members met at Andrew Haydon Park to do some birding. Birding is the act of cataloguing local birds. It is great for getting fresh air and learning about the different types of birds. Mark Gawn, who was leading the outing, has vast knowledge of birds and their migrating patterns. I learned a lot about birds and how to identify them.

A few tips on birding, it is a good idea to bring along a field guide to help you identify the birds and know ahead of time what birds you might find in an area. Because many birds migrate through our area, fall is a great time to find a large variety. It is also a good idea to bring a pair of binoculars.

We saw a number of migratory fall birds, probably the best known being the Canada Geese. We also saw Common Goldeneyes, which can be identified by their protruding forehead and the white spots under their eyes; they also have black and white feathers. We also spotted Red-necked Grebes, which can be identified by their red neck and needle-like beak. Depending on time of year the colour of the feathers can change.

At Ottawa Beach, we saw a few other birds, including a Bonaparte’s Gull. This bird lives in the boreal forest and can be identified by the white edges on its wings. Surf Scoters were also seen – a beautiful black and white bird.

After a hike in the forest and a stop to listen to the singing of American Tree Sparrows and other birds, we arrived at another site where we were hoping to see a King Eider. Unfortunately, we did not find one, although we DID spot a Black-bellied Plover, a Bald Eagle and its nest, a Northern Shoveler, and a Northern Pintail, just to name a few. There were large flocks of maybe 70 or more individuals. Most were White-winged Scoters and Black Scoters, but there where also Redheads, American Wigeons, Long-tailed Ducks, Gadwalls, and Barrow’s Goldeneyes.

In the end, I learned a lot about birds and how to recognize them. It was lots of fun; I would definitely recommend birding and will be doing it whenever I get the chance. All of the results were posted to eBird, a popular database that you can report your own results to.