Flora and fauna of the Marlborough Forest

On Saturday July 19, eight OFNC members joined me for a hike in Marlborough Forest. Marlborough Forest is the name ascribed to a large natural area owned by the City of Ottawa, in the southwestern corner of the municipal boundary. The largest forested area in the City of Ottawa boundaries, it contains a diversity of habitats, including various wetlands and alvar openings. 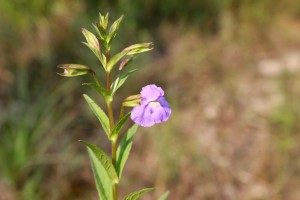 Square-stemmed Monkeyflower (Mimulus ringens): Although square stems usually mean mint family, this plant is a figwort (Scrophulariaceae). Its relation to monkeys is distant at best.

We started the day hiking south into the entrance that connects to the Cedar Grove Hiking Trail, which overlaps with a portion of the Rideau Trail. It wasn’t long before we began to see the site’s botanical diversity. A late Wild Columbine (Aquilegia canadensis) was still booming in the first clearing along the road, while Black-eyed Susans (Rudbeckia hirta) were putting on a show. We quickly found three species of aster, without the aid of the flowers that start to bloom much later in the summer: Arrow-leaved (Aster urophyllus), Heart-leaved (A. cordifolius), and New England (A. novae-angliae). Northern Leopard Frogs (Rana pipiens) hopped off of the trail here and there. This species’ spot pattern is extremely variable.

OFNC member and entomologist extraordinaire, Diane Lepage, showed off an Acadian Hairstreak (see photo) and her skills with a butterfly net, and a White Admiral flew by.

Our first destination was an alvar clearing that has been the site of some dumping in the past. Although that may sound unappealing, one result is an abundance of discarded pieces of flat plywood – the herpetological equivalent of bird houses. After flipping boards for only a short time, we found a Northern Red-bellied Snake and an Eastern Gartersnake. The garter chose intimidation as its defensive strategy, by flattening out, puffing up, and striking haphazardly at the air, and at any shoe it saw moving. The bite of this species is harmless. The Redbelly was more mild-mannered, electing to demonstrate its characteristic “grin”. The snake curls its upper lip and bears its teeth, about as mean as this snake’s defense gets. It then rubs its head against the “predator” – in this case my fingers – and tries to create a scrape with the rough edges of its teeth. The resulting prickle feels a little like a single spoke of Velcro.

We then proceeded to a large pond with an adjacent clearing that is cut periodically. We heard both Green Frogs and Bullfrogs calling from the pond, where a single Midland Painted Turtle was out basking. Butterflies and dragonflies abounded in the clearing. Common dragonflies included Twelve-spot Skimmers, Common Whitetails, and Widow Skimmers. The Common Whitetails were especially concentrated below a small dam, where we could also see Green Frogs, Bullfrog tadpoles, schools of minnows, and a large leech.

Crescent butterflies were particularly common in the clearing, and Diane Lepage again put her net to good use, managing to capture both a Northern Crescent and a Pearl Crescent for viewing in the same jar. These two species are notorious for being difficult to separate, and this allowed students of Lepidoptera to familiarize themselves with some of the key differences.

Green Comma – side one

Green Comma side two – the pretty side!

After returning to our vehicles for lunch, we explored a different section of the forest along a fire road. We found several more butterflies, including Mourning Cloaks, Eastern Commas, and Green Commas with their characteristic the greenish markings and the comma-shaped blotch. We also found Rhamnus alternifolia, Alder-leaved Buckthorn, a.k.a. “the native buckthorn.” It confused us initially as it was growing beside an invasive Glossy Buckthorn.

All-in-all, it was a fairly productive outing. We did not cover a lot of ground in terms of distance, but by taking our time we were able to see a lot of biodiversity.

This flower spider has caught an unlucky bumblebee. This spider can change colour to match the flower it is sitting on.

Another flower spider is either setting an ambush or really wants a hug.

This miniscule member of the Mint family is False Pennyroyal (Trichostema brachiatum), it is an uncommon native species found mostly in alvars.

I don’t remember what species of caterpillar this is, but it is eating Purple Loosestrife, so I like it!

This was one of the many Northern Leopard Frogs that hopped off of the trails. Usually these frogs prefer to hop into dense vegetation when cameras are near, but this one decided to pose.

All photos taken by Jakob Mueller