On their February 8th field trip, the Macoun Field Club snowshoed across their Study Area’s biggest cedar and ash swamp in Ottawa’s Greenbelt.  We crossed deer, hare, and fisher tracks so often that most of the kids came to know them on sight. Ermine and shrew tracks, each seen only once or twice, required a good deal of prompting.

From time to time we looked overhead to see if woodpeckers had been finding Emerald Ash Borers – the birds flake away patches of bark and extract the beetle grubs. The signs were there; the D-shaped exit holes were diagnostic. The exit holes show that the insect has penetrated 300 metres into the western Greenbelt’s best preserved natural zone since last year at this time, when we were finding Emerald Ash Borers only around the margins, near roadways. There appear to be none farther in – yet. 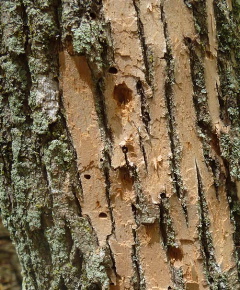 Woodpeckers flake away the bark to get at the beetle grubs burrowing underneath.