As spring very slowly chugs its way into our region, many of us find our thoughts turning, longingly, to gardens and gardening. Those of us inclined to create and maintain gardens for wildlife, are also interested in the various things we can do to enhance our site for birds, bees, and other creatures. Bird boxes, bird baths, squirrel houses, roosting boxes, toad houses, and bee boxes are just some of the things that can be installed to help our fellow creatures. In this article, I’d like to focus on bees, and more specifically, on one type of bee that readily comes to bee boxes: the leafcutter bee in the genus Megachile.

First, a word about accommodation for bees. There are any number of plans for building bee boxes, ranging from the very simple to the extremely elaborate. In another article I’ll talk about the wealth of information available, but here I want to mention one very simple bee box we installed at the Fletcher Wildlife Garden a few years ago and how it attracted a number of Megachile leafcutter bees. Made for us by Bruce Burns, it was initially part of a display we had created to celebrate pollinators. In mid-summer 2009, I installed the bee box on a south-facing post behind the compost bin. A few days later I went back to see if anything might be using it (not really expecting any activity, but what did I know!). To my surprise, I found several leafcutter bees busily investigating the holes in the box. Within a couple of weeks it was very apparent that this bee box was being well used by a number of these bees, and I watched, fascinated, as they carried leaf sections, cut from rose bushes, into the boxes. When an AAFC scientist installed temporary bee boxes at the FWG in the summer of 2012, leafcutter bees were common inhabitants.

The family Megachilidae, typically called the leafcutter bees, includes a variety of genera, but the ones I am especially interested in are those in the genus Megachile. They are very common at the FWG, as indeed, they are throughout this region. Some years before I installed the bee box, while out exploring near Carleton Place, I’d come across nest sites containing a few leafy cells made by Megachile bees, and they were so remarkable that I began looking for similar cells in other areas. Most of the ones I found were under rocks, but they could equally be in rotting wood, in tunnels in the ground, in and around human made objects such as pipes, under bricks, or, as at FWG, in bee boxes.

The bees cut nearly perfect circles from leaves in the Rosaceae family, to construct tubular shaped cells, beautifully formed, and sealed with a leaf circle. In these cells a ball made of pollen and nectar is placed and an individual egg laid on top. A nest site can contain several cells, each closed off with a leaf circle. Some of the ones I have found were newly constructed, the leaves still fresh and green, others old and the leaves dried out. Some had obviously been disturbed by a predator. Some were half buried in the soil, others were jumbled together on top of the soil but under a rock.

I don’t know the exact species of Megachile that made these nests, but two common species are Megachile frigida and M. latimanus (the latter I have photographed at FWG, and the photos were identified to species by an expert). I tend to call all the Megachilid leafcutter bees I see, Megachile sp. These bees are easy to spot, as they carry pollen on their abdomens, instead of in pollen sacs on the legs, as most bees do.

Following are photos of the bees and their nests, including a bee busily constructing her nest. Many of these photos were taken at the FWG. 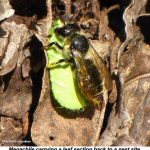 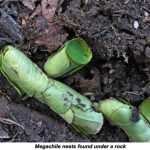 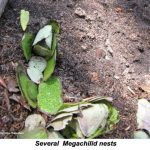 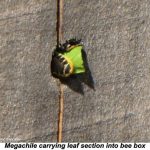 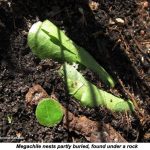 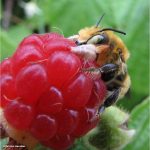