Victory! An end to the Snapping Turtle hunt 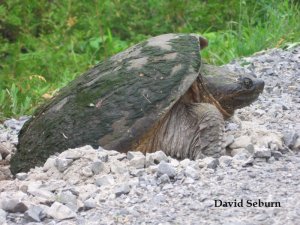 “Snapping Turtles take about 20 years to reach maturity in Ontario” – that’s a long time to survive before being able to reproduce! (photo by David Seburn)

Earlier this year, the Ontario Ministry of Natural Resources and Forestry (MNRF) released proposed changes to the hunting regulations for the province. Among them was a proposal to shorten – but not end – the hunting period for the Snapping Turtle.

The Snapping Turtle is listed as a species at risk both provincially and federally. The management plan for the species clearly states, “Considering the reproductive strategy of the Snapping Turtle (i.e., delayed sexual maturity, high embryo mortality, extended adult longevity…), harvesting (legal or illegal) of adults and older juveniles is especially harmful for wild populations.”

The hunting of turtles is rarely sustainable given their life histories. Snapping Turtles take about 20 years to reach maturity in Ontario, many of their nests are predated by Raccoons, and they face ongoing threats of wetland loss, traffic mortality (often adult females looking for places to nest), and persecution by people. Given all these factors, many people were upset that the MNRF was not going to end the hunting of Snapping Turtles in Ontario. Many organizations, including the Ottawa Field-Naturalists’ Club, Ontario Nature, and the David Suzuki Foundation mounted a campaign to encourage people to tell the government that the Snapping Turtle should not be hunted. 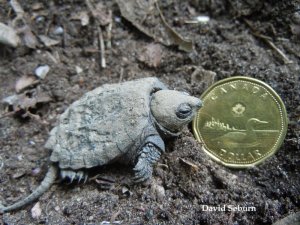 Newly hatched snappers face many challenges from the time they emerge from their nest. The new ban on hunting removes at least one of them. (photo by David Seburn)

Over 13,000 comments were submitted on the proposed hunting regulations and the effort paid off. In the revised regulations, posted on March 31, the government of Ontario had removed the Snapping Turtle from the hunting list. Thanks to everyone who urged the government to end the hunt.

This is a great victory for the Snapping Turtle and everyone who took the time to write to the government about this issue. It is also a powerful lesson to those who care about nature. Current events in the world, particularly south of the border, can make it easy to believe that things are hopeless. But governments do listen to people. When we join together, our voices can be heard and public policy can be changed. It is not always easy, but persistence can pay off. Slow and steady can win the day.

Thanks to everyone who urged the government to end the hunt. Slow and steady can win the day. (photo by Barry Cottam)